BEIJING
SELECTED KEY* PERFORMANCES
* read more about different types of performances in East by Northeast HERE ; to see the full list of all performances go HERE

In Beijing my initial steps led me again to the ‘base’ of the city – the center. One of its historical features is the 8km long north-south Central Axis of Beijing, which, following the traditional preference for symmetry, divided the city into two halves. Major ancient buildings are concentrated around the line, and as of today, it is still in “full vigor and of historical significance”. (China.org.cn 2018) To walk this path was for me a pleasant experience and a sign of Beijing authorities paying attention to (selected parts) of its historical heritage. Of course, one has to get used to the constant presence of crowds of people and the omnipresence of the CCTV cameras and police but these are elements quite characteristic for the whole city.

Much less sensitive was the extension of the 17th century Tiananmen Square (‘Gate of Heavenly Peace’ Square) in the 1950s, during the reign of Mao Zedong. It was enlarged four times, making it the new center of the socialist Beijing, replacing the adjacent Forbidden City and paying very little attention to the cosmological order of the ancient city. To walk around the Tiananmen Square was both a chilling, as well as confusing experience. I could strongly feel, that this is no ordinary square, if for nothing else, then for its size and the strict security measures. I experienced the square full of (loud) and cheerful people making pictures with communist monuments, such as a large portrait of Mao Zedong, on a background. From similar places I have witnessed, Tiananmen and indeed the whole Beijing could be positioned somewhere between the totalitarian-feeling of Minsk in Belarus and the Truman Show (Peter Weir, 1998) kind of dystopia in Singapore.

In the fourth installment of my metro series, in which I have again spent a day inside of the metro system, I made an important adjustment in one of the project’s main rules and equipped myself with a smartphone. In Metro I-III I would always deliberately avoid using this piece of technology considering it as a too distracting element. But I wanted to experiment with the series and this felt like a logical step as Beijingers and the Chinese more in general seem to be obsessed with smartphone technology. (Sun 2018) Unlike metro systems I have encountered elsewhere, in Beijing, there is always a mobile phone signal which enables one to stay connected to the internet even inside of running carriages.

The subway tends to be overcrowded, users are being squeezed inside of trains and in stations navigated through fenced corridors like a cattle. Once you make sure you are on the right line or in the right corridor, you can switch off your thinking – the subway machine ensemble thinks for you and will lead you where you need to get. Also, there is often not much to be seen, other than the mass of (slowly moving) bodies. To escape into a virtual world provided by the personal phone seems like a quite meaningful solution. Because of this ‘habit’, I also decided to implement the usage of the phone into my project. The involvement of the mobile technology gave the work a new dimension but at the same time, as expected, my experience was much more fragmented. I was less focused, more ‘elsewhere’ and less ‘in the metro’.

Metro IV: Beijing was selected for publishing in the Transart Communication 30 catalogue.

Jing-Jin-Ji will be what some call a ‘supercity’ (Johnson 2015) or a ‘megaregion’ (Shepard 2016). The shortcut stands for cities of Beijing, nearby megacity Tianjin and the surrounding province of Hebei. The goal of the project is to interconnect the three places into one giant urban environment with over 100 million inhabitants. The inspiration can be found in similar agglomeration developments in South China such as the Yangtze River Delta and the Pearl River Delta, one of the aims being the boost of the region’s economy. There are also other advantages which building the Jing-Jin-Ji hopes to offer – decentralization should alleviate some of the most pressing Beijing’s maladies such as the overpopulation, pollution, traffic jams, water shortages and ideally raise the quality of living for the region’s inhabitants. Importantly for my project, for such an urban environment to function a high level of interconnectivity is crucial. That is why new highways are being constructed, as well as high-speed railways and even a brand new Daxing International Airport. (China Briefing 2018)

In my articulation of the growing megaregion I decided to travel from Beijing to Tianjin, from Tianjin to the Xiong’an New Area, which is one of the key developing sites in Hebei province (China Briefing 2019) and back to Beijing. I have chosen to use (high speed) trains which shall soon become a crucial means of transportation of the region. I divided the trip into two days – at first, I stayed in and explored Tianjin, an important Chinese port with 15 million inhabitants. The second day I continued to considerably smaller Xiong’an. 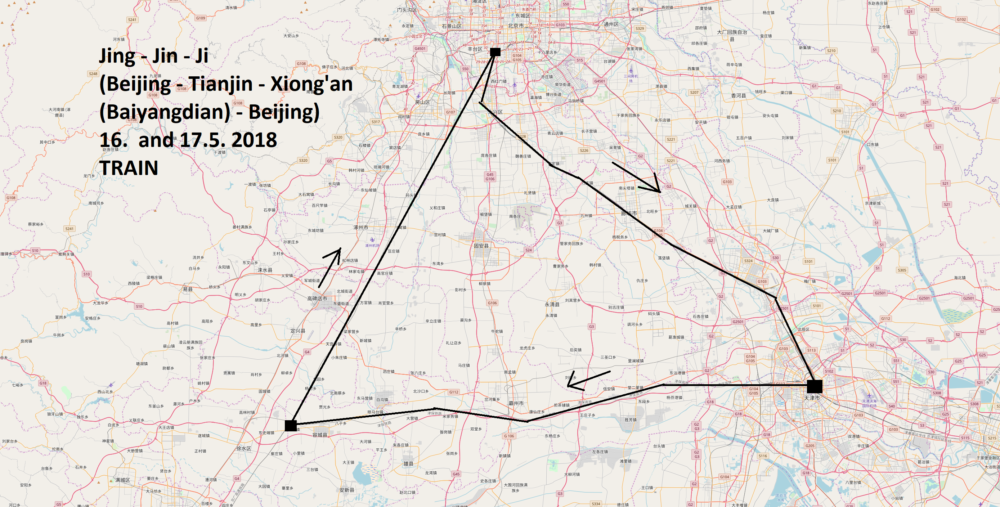