ULAANBAATAR
SELECTED KEY* PERFORMANCES
* read more about different types of performances in East by Northeast HERE ; to see the full list of all performances go HERE

Most of the key performances I conducted in Ulaanbaatar relate to a lack of its (public transport) infrastructure. While the city works on improving its conditions, it is still difficult to successfully implement even major projects. Postponements of important decisions related to infrastructure development make the city incapable to deal with its traffic issues.

Introduction of the BRT – Bus Rapid Transport – is supposed to solve some of the problems.This form of urban transport development is common in cities of developing countries. According to one of the previous proposals, three main BRT corridors were suggested to be built in the period 2012-2018. (Gerelchuluun 2013: 19) Despite some minor improvements, the possibly most important element – bus lanes separated from the car traffic – were still not to be seen in Ulaanbaatar during my stay in 2018. I decided to articulate this immaterial infrastructure by using means of transport which were available – walking and ‘classical’ buses. I knew that it would not be possible for me to perform all the proposed lines and hence I chose to focus (more or less randomly) only on certain segments.

Non-existing BRT “N-S Ext South” corridor would, if constructed, lead one to a Zaisan Memorial, a monument on the top of a hill commemorating the Mongolian-USSR friendship and complemented by a tank displayed nearby. In a sharp (and symptomatic) contrast there is a great statue of Buddha located just below the hill in the so-called Buddha Garden/Park which it is “harder to appreciate these days since the construction of a high-rise, commercial development that encompasses the 23m-high Sakyamuni statue.” (Lonely Planet 2017) The area at the end of the missing BRT line displays many of the dynamics significant for the contemporary Ulaanbaatar be it its socialist heritage, the influence of tradition or neoliberalism.

Quite similar performance as the Performing BRT N-S Ext South (walking) was the Performing proposed connection to the New Ulaanbaatar International Airport (car). The new airport is being built some 50km outside of the city and was supposed to be open by 2016. Due to delays the current commencement date should be in 2020 (update: no signs of opening in September 2020).The Aeroexpress train connecting the airport to the city is supposed to commence its operation in 2030. (Sosorbaram 2016) As of now, it is not possible to reach the airport in construction by any means of public transport.

I decided to use a car: two Mongolian artists drove me to the site. After a drive through the empty steppe we have arrived at an endpoint of our short journey – a closed road protected by a guard. While in theory, since 2016, the road was supposed to be an entry point from Ulaanbaatar city to the hub of Mongolia’s international traffic, in praxis to travel to the airport felt just absurd and futile. It is, nevertheless, very likely that within a few years the trip we have conducted will become a very common one be it in a car or on a board of some rapid transport means.

The unrealized paths I followed in the city were not generated by my visions and wishes. Rather, I was articulating the dreams of Ulaanbaatar as it wants to be constructed and how it wants to perform itself. For example, not being seen as dysfunctional and backwarded but as a modern city, a capital interconnected with the rest of the world through a new international airport, on the intracity level operating smoothly with its BRT lanes and the new underground system. 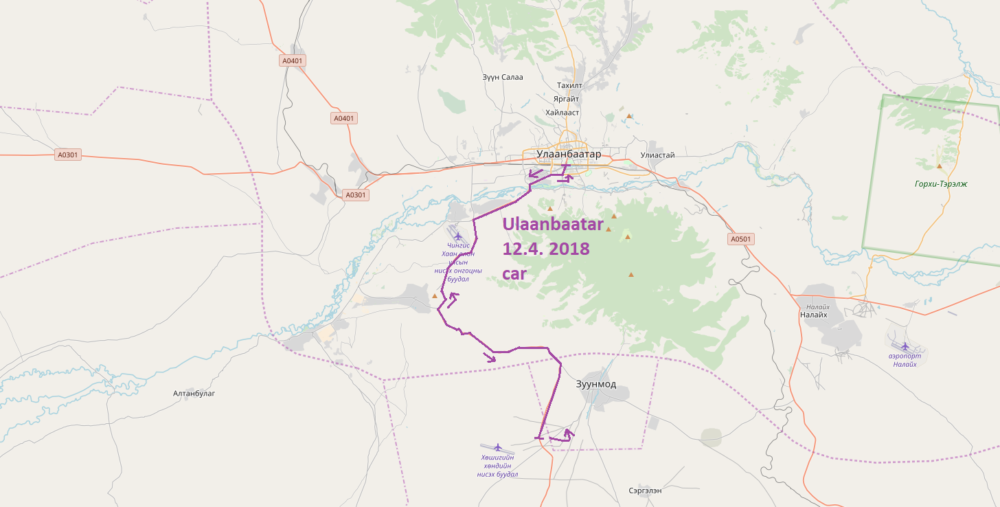 In this walk I was performing the city’s main thoroughfare – Peace Avenue – and at the same time a hypothetically very important yet missing part of the city’s transport infrastructure – the metro system of Ulaanbaatar . This time, I came up with a slightly new strategy. Instead of walking (more or less) without interruptions I decided to make fourteen stops on my way corresponding to the proposed fourteen metro stations.

When performing the missing metro I decided to materialize my bodily presence more than usual and to include myself in the recorded material, so as to visualize an image of the struggling individual. The resulting documentation portrays myself being still, sitting or standing, in the respective locations. 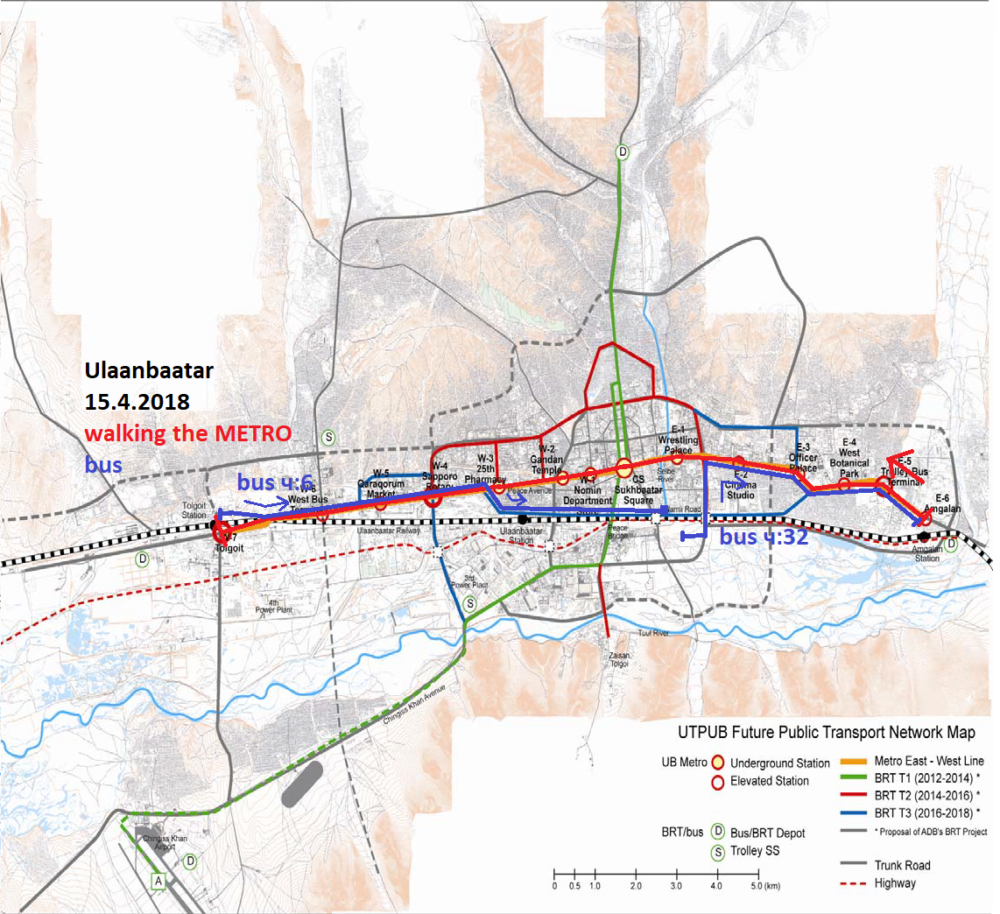